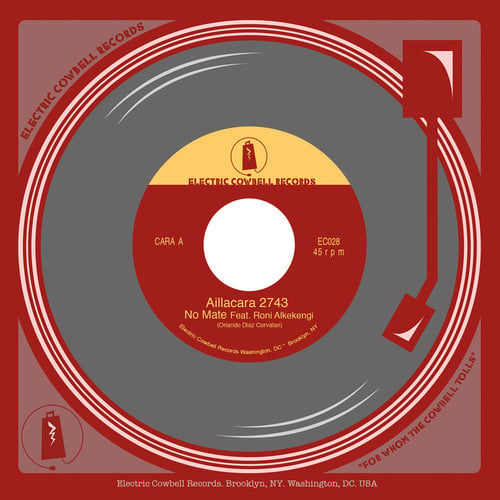 Side A: No Mate

Side B: Para La Libertad

From French-Chilean multi-instrumentalist, DJ, and producer Aillacara 2743. He premiered his vibe on a cumbia-infused 7” on Names You Can Trust. On this release for Electric Cowbell he is mining a hot Afro-Latin funk influence. This 7" is rooted in the 70's Afro-Cuban funk productions from the famous Cuban state-run Egrem label (Empresa de Grabaciones y Ediciones Musicales - Spanish for 'Recordings and Musical Editions Enterprise') that released artists such as Los Van Van and Grupo Irakere. (Limited edition 400 copies pressed) 45RPM 7" Full-color label and full-color Electric Cowbell sleeve with die-cut center. Side A starts off with “No Mate,” a mid-tempo funky Afro-Cuban son with a strong message coming from Native American wisdom. It’s a call to humanity and a tribute to the Amazonian tribes who protest and defend their lands from being exploited by multinational corporations. Side B is a funky polyrhythmic instrumental called "Para La Libertad.” It’s a dynamic uptempo Afro-Son dedicated to freedom; people's freedom to enjoy life and to get up dance.

Aillacara 2743 is the adress of Orlando Diaz Corvalan's family home in Santiago, Chile. It's the name he chose to represent the Latin side of his creative endevours. Born into a family of engaged musicians, with a dissident father who escaped Chile under the Pinochet reign, his family took political refugee in France, where Orlando grew up. His musical productions reflect an uprooted Latin culture that he keeps alive through his music. He composes, writes, produces, plays and programs the main instruments in his songs. As a DJ, he draws inspiration from his collection of Latin and Cuban vinyl from the 60s and 70s. Areito, Sound Triangle, Fuentes, Sono Radio, Inca, Tico, Tropical, Mericana are names that rotate on his turntables regularly. Andean rhythms, Afro-Cuban and Latin funk, Colombian cumbia, Argentinian jazz are some of the influences that lend color to his productions.