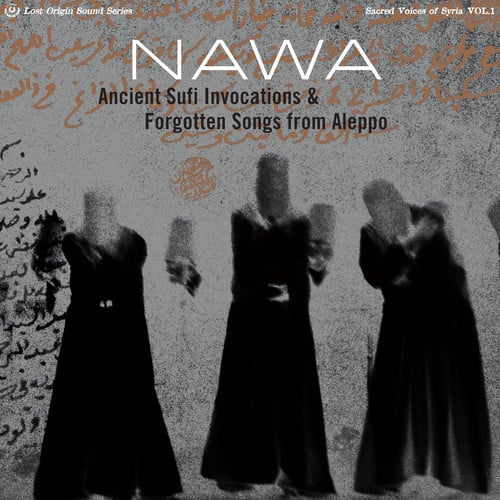 Ancient Sufi Invocations and Forgotten Songs from Aleppo is a beautiful album of sacred chanting and haunting melodies-a collection of ULTRA rare SUFI recordings captured in SYRIA months before civil war erupted. It was recorded by Jason Hamacher in the courtyard of a 500-year-old-house in Aleppo, one of the world's oldest cities. In 2009 in Aleppo, Syria, A small group of Sufi musicians band together to preserve the nearly forgotten melodies, songs, and poems unique to the ancient city. In 2010 Jason Hamacher was in Aleppo to document the ancient prayers, hallowed rituals, and sacred spaces of Syria's religious minorities. Hamacher heard about a secretive group of Sufi musicians that practiced “the old traditions.” Intrigued by the mysterious description, Hamacher sought an introduction to the group through a mutual friend & became the first Westerner to hear NAWA preform. NAWA performed in public a handful of times before Syria erupted into civil war. The group’s displaced members are now scattered throughout Europe and the Middle East.

"As one of the earth's oldest continuous urban cities gets erased from the cultural memory of the volatile Levant in the present time (2012-1013), these recordings, captured just before the continuous demolition of Aleppo, are an ominous statement from one of its most sacred and ancient vocal traditions."
(Hisham Mayet-Sublime Frequencies)