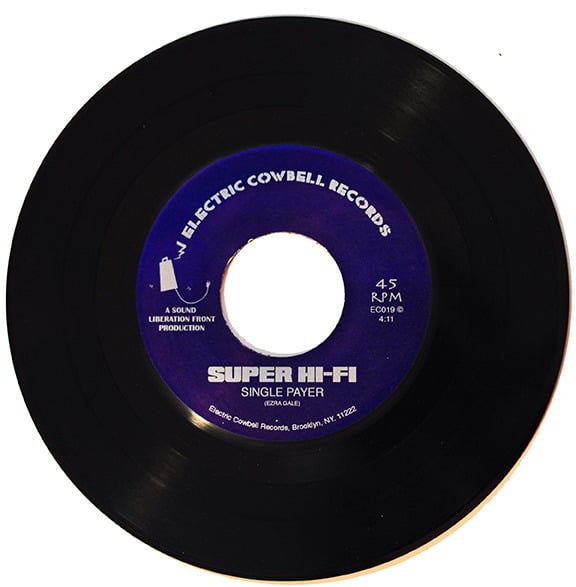 Super Hi-Fi’s Electric Cowbell Records debut, “Single Payer” is a full-throated double trombone-fueled blast of classic dub. Refashioning a UK-steppers vibe with traces of ska and rocksteady, the Brooklyn-based band lays down a slab of raw groove made even more scintillating on legendary dub producer Victor Rice’s B-side remix. Led by bassist and composer Ezra Gale, whose last outfit Aphrodesia memorably took their take on afrobeat all the way to Femi Kuti’s Shrine in Lagos, Nigeria, Super Hi-Fi has created waves in the fertile Brooklyn music scene for two years now. Partnering with the Sound Liberation Front- the production crew responsible for NYC’s Dub Invasion Festival- the band hosted the popular monthly “Afro-Dub Sessions” that featured collaborations with everyone from Subatomic Sound System to Ticklah and others, and now takes the leap onto vinyl with the SLF’s production help.

Featuring Alex Asher and Ryan Snow on trombones, Will Graefe on guitar, Gale on bass and Madhu Siddapha on drums, Super Hi-Fi’s
arresting sound is showcased on “Single Payer,” a tongue-in-cheek
political reference that is probably the only dub track you will hear
that works in samples of Nancy Pelosi and Joe Lieberman alongside a
fiery trombone solo.

The vinyl 45 comes with a download card that contains not only MP3
versions of both sides, but additional Victor Rice dub mixes that
complete a three-part refashioning of the track.